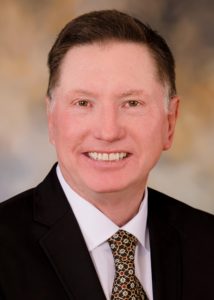 Stuart Allen coached basketball for over 40 years and won over 400 games. He reached the pinnacle of the high school game in 2007 when his Madison County Tigers won the Class 4A state championship. The 1976 Austin graduate earned two letters playing basketball for Hall of Fame coach Joe Jones. When Austin, under Hall of Fame coach Bob Harpe, won the Class 6A state championship in 1993, Allen was a key part of the Black Bears’ coaching staff. In 1998, Allen became the Austin head coach. In seven years his teams went 153-58 with four trips to the regional and one trip to the state tournament.

Basketball in his DNA

Stuart Allen learned the game from some of the best 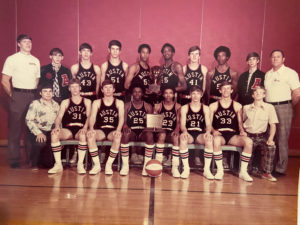 There’s a photo in Stuart Allen’s office at home that serves as an exclamation point to a career night that most high school basketball coaches can only dream to see.

Allen is in the middle holding the 2007 Class 4A state championship trophy that his Madison County Tigers won that evening in Birmingham with a 54-51 win over Douglas.

To make the moment even sweeter, it was Allen’s first season at Madison County.

The smile on his face in that photo may be brighter than the gold letters that spell STATE CHAMPION on the trophy’s blue background.

To the left is older son Parker, who served as an assistant coach for the Tigers’ run to the top of the mountain. To the right is younger son Hunter who played on that state championship team.

It’s a family celebrating the best of times in a profession that’s really more of an all-consuming lifestyle that has a habit of dealing more heartache than joy.

“That team was a throwback. They did whatever I asked them to do,” Allen said. “No matter what happened in the game, the guys always kept on playing. They made everybody think I really knew what I was doing.”

One of Allen’s earliest memories is riding to basketball games with his father, the late Jack Allen, a 1992 Morgan County Sports Hall of Fame inductee, who was a long-time high school official.

Jack’s officiating partner would be in the front seat. Stuart would sit in the back listening to the men talk basketball.

“At one time Dad had the longest streak of working consecutive state tournaments,” Allen said. “Back then the state tournament was played in Tuscaloosa at Foster Auditorium. The whole family would get to go and we stayed at Dill’s Motor Court. That was a pretty special treat.”

Instead of following his father’s path to being an official, Allen took the coaching route. It worked out well with over 400 victories.

Allen had a Master Class of coaching from three of the area’s best in Joe Jones, Earl Morris and Bob Harpe. Jones was his coach at Austin. Morris was the Decatur coach when Allen got his first job as head coach at Oak Park Middle, the feeder school for the Red Raiders. Harpe was the head coach at Austin when Allen joined the staff in 1990.

“Coach Jones is a high school coaching legend,” Allen said. “He was like another father figure to me. A lot of the ways I ended up doing things as a coach can be attributed to Coach Jones.

“Earl Morris let me watch and learn how he did things. He and Coach Jones did a lot of things the same way, but I still learned so much from being around Coach Morris. He was a big help to me.”

Harpe succeeded Jones as head coach at Austin in 1983. He brought Allen over from Oak Park in 1990.

“I was thankful Coach Harpe had enough courage to hire me,” Allen said. “He put a lot of trust in me and that helped me develop as a coach.”

One of Allen’s jobs at Austin was to coach the freshmen team and prepare them for the future on the varsity.

“I remember our first meeting with Coach Allen as freshmen (in 1990),” Arthur Morris said. “He told us we all had a clean slate. That was important to me because I was on the team at Brookhaven in the 7th and 8th grades and rarely played. 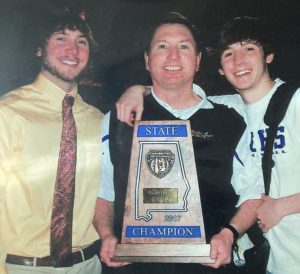 “He really did give us all a clean slate. I learned about the value of hard work and discipline. He started showing confidence in me and I started playing with more confidence. I was playing on the varsity the next season.”

“Everything I gave to that championship team was because of the confidence that Coach Allen gave to me when I was a freshman,” Morris said.

Harpe left Austin in 1998 and Allen became the third ever basketball head coach at Austin. In Allen’s seven seasons, the Black Bears went 153-58 with four regional appearances and one trip to the state tournament in 2002. He coached three All-State players in Okechi Egbe, Juwan Garth and Tyler Holloway.

In 2005, Allen decided to step away from the game. That lasted just one year. Madison County hired him in the summer of 2006.

“I really didn’t know what I was getting into and then four months later we’re state champions,” Allen said.

After three seasons at Madison County, Allen became head coach at Hazel Green. His first season had just started when his son Parker was involved in a serious auto accident that left him needing 24-hour care.

Allen briefly left coaching again. In 2010 he took over the program at Saint John Paul II. The school had never had much success in basketball. In 10 seasons, Allen coached two teams to the regionals. He left coaching again in 2020.

“People have asked me how I got into coaching and I tell them ‘I just got in the wrong line on the first day of college at Calhoun,’” Allen said. “I never thought I would make it my life’s work, but I’m glad I did.

“It’s not an easy life style. There’s a lot of strain and stress because you put so much into it. Thankfully, my wife Roslyn has been my biggest supporter.”