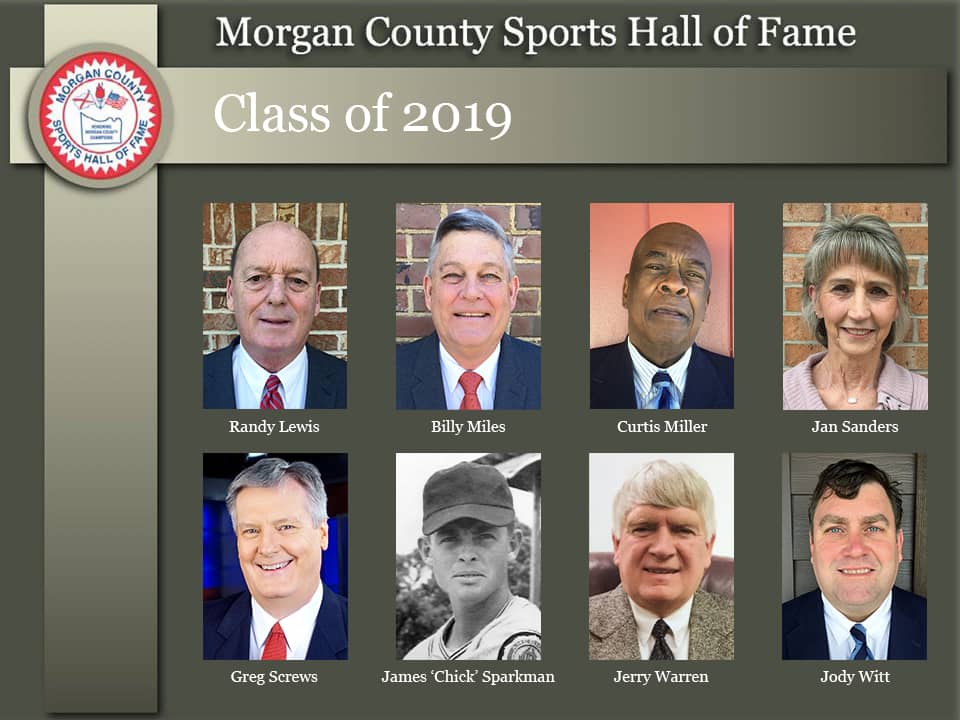 Jan Sanders picked up her first bowling ball when she was just 8.

“My brothers started going to the bowling alley, so I just went with them to see what it was about,” Sanders said.

The Decatur native had no clue that she would discover the sport that has carried her across the country competing in bowling tournaments and earned her national recognition.

“I’ve always been a competitive person,” Sanders said. “In the summer I would compete in swimming and diving. In the winter I turned to bowling. It’s the perfect sport for me.”

Sanders is one of eight in the Class of 2019 for the Morgan County Sports Hall of Fame. The other seven are Randy Lewis, Billy Miles, Curtis Miller, Greg Screws, James “Chick” Sparkman, Jerry Warren and Jody Witt. They will be inducted at a banquet on May 4 at the Ingalls Harbor Pavilion.

Screws played basketball at Hartselle before starting a career in television news and sports. He’s a news anchor for WHNT Channel 19 in Huntsville.

“I was floored when I out found out about the selection,” Screws said. “I’m really flattered. This is a really cool honor.”

Hall of fame honors are not new for Sanders. She was inducted into the Alabama Women’s Bowling Association Hall of Fame in 1997.

“Basically, bowling became my passion,” Sanders said. “It still is.”

Sanders doesn’t travel the country competing in tournaments like she once did, but she’s still competitive. She bowls in three different leagues each week. If there’s ever a bowling league in the area looking for a sub, Sanders is always available.

Randy Lewis, 64, starred in basketball and baseball at Danville in the 1970s. He was an All-State selection in basketball in 1973 and a three-time All-County selection. He also played on two county championship baseball teams.

Curtis Miller, 77, was a star athlete in basketball, football and track at Decatur’s Lakeside High School in the 1950s. He played basketball at Alabama A&M. Miller was also one of the Decatur Roughriders, a semi-professional football team that posted a 66-2 record over four seasons.

Jan Sanders, 64, made her mark in bowling in the late 1980s. In 1989 she was the Alabama champion in the competition for Team USA and finished 15th nationally out of 22,000 to earn a spot on Team USA. In 1990, she competed in the U.S. Olympic Festival and took home a third-place medal. She was inducted into the Alabama Women’s Bowling Association Hall of Fame in 1997.

Greg Screws, 59, found fame on the basketball court for the Hartselle Tigers in the 1970s. He played two years at Wallace State before graduating from Alabama. Screws went into broadcasting and worked his way up from a sportscaster to being a new anchor for WHNT Channel 19 in Huntsville.

James “Chick” Sparkman, deceased, was a baseball and softball legend in Decatur in the 1940s, ‘50s and ‘60s. Back before television began to bring baseball to homes across the country, Decatur’s Legion Field on Sixth Avenue was the place to be entertained by the game. Sparkman was one of the stars.

Jerry Warren, 64, was a scoring machine for the Danville Hawks in the early 1970s. He averaged a double-double when the Hawks won a combined 51 games in 1970-71 and 1971-72. After one year at Calhoun, Warren went on to star at UAH. In two seasons at UAH, he scored in double figures 20 times.

Jody Witt, 44, closed out his basketball career at Austin with a state championship in 1993 when the Black Bears beat Tuscaloosa County for the Class 6A crown. Witt was a three-year letterman, team captain and honored for his rebounding and defensive play.

Randy Lewis was an All-State basketball selection from Danville in 1973. The shooting guard for coaching legend Wayne Bowling scored 1,884 career points in three seasons. He was a three-time All-Morgan County selection. In his senior season, Lewis averaged 26 points and 16 rebounds a game. He scored 16 points in the North-South All-Star game.  Lewis also excelled on the baseball field where he played on two Morgan County championship teams.

Curtis Miller starred in basketball, football and track and field at Lakeside High School in the late 1950s. He played on the varsity as a freshman and was team captain his senior season when the Tigers went undefeated with 22 wins. In track and field, he starred in the broad jump, shot put and 440-yard and 880-yard relays. After two years of basketball at Alabama A&M, he returned to Decatur and played semi-pro football for the famed Rough Riders, who went 66-2 over five seasons in the 1960s.

Jan Sanders made her mark in bowling in the 1980s and ‘90s. In 1989 she was the Alabama champion in the competition for Team USA and finished 15th nationally out of 22,000. In 1990, she represented Team USA in the U.S. Olympic Festival, where her team took home a third-place medal. In 1994, Sanders was Coca Cola World Cup champion in Alabama and finished seventh overall nationally. She was inducted into the Alabama Women’s Bowling Association Hall of Fame in 1997.

Greg Screws grew up longing to be a part of the history of Morgan County basketball. He got his wish in 1973 as a 6-foot-7 center for the Morgan County Tigers, where he earned All-Region honors in 1977. He also played basketball for two years at Wallace State Community College. After graduating from the University of Alabama in 1981, Screws began a television broadcasting career, first covering many of the top sports stories in the state. Later, he became a nightly fixture in North Alabama as a local news anchor.

James “Chick” Sparkman goes down as one of the all-time great baseball players during the golden era of the game in Decatur in the 1940s and ’50s. He was a legend playing in the outfield and hitting home runs for the semi-pro Decatur teams that brought out the crowds to Legion Field. A stadium in the Philippines has Sparkman’s name on the wall honoring him for a home run he hit there in 1946 while in the Army. The names Lou Gehrig and Babe Ruth are on the same wall for home runs they hit there when the stadium opened in 1934.

Jerry Warren showed how determination can be an advantage on the basketball floor. The 6-foot-1 Danville Hawk could score and rebound among the best in Morgan County in the early 1970s when star big men dominated the game. He averaged a double-double as a junior and senior with 1,417 points and 871 rebounds. The Hawks won 73 games in his three years on the varsity. Warren played at Calhoun Community College and then at UAH in the early days of the Chargers’ program.

Jody Witt was a key part of Austin’s 1993 Class 6A state championship team coached by Bob Harpe. Austin defeated Tuscaloosa County, 54-44, in a game played in Auburn. Witt scored 14 points, including 10 early in the third quarter. The three-year letterman was an All-Area selection. He was named team captain and received team awards for defense, rebounding and free throw shooting.