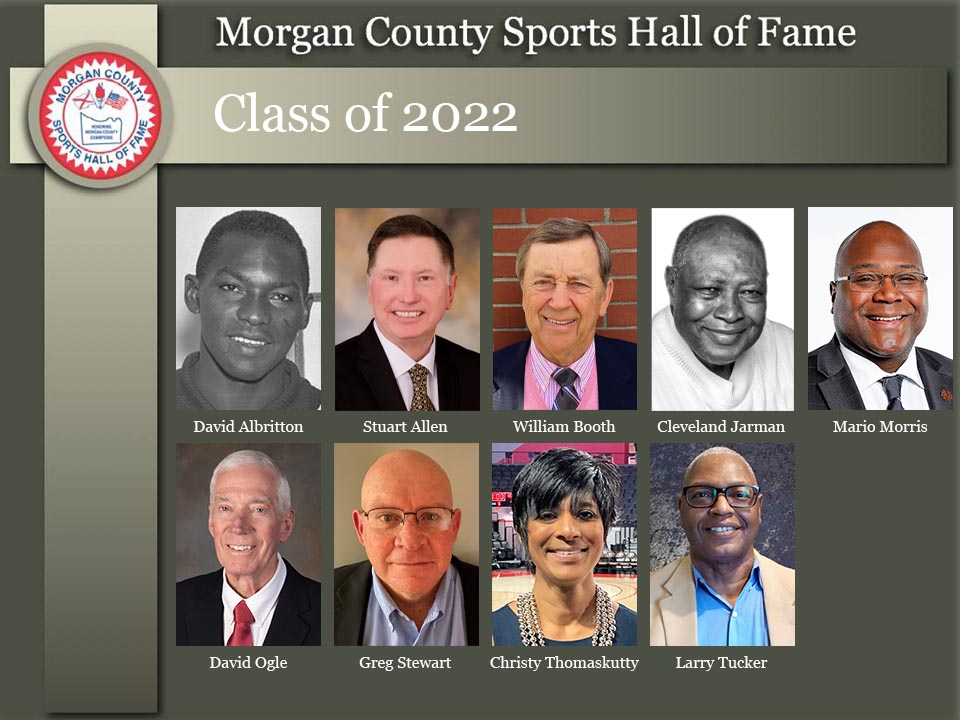 David Albritton, who is deceased, was born in the Danville area in 1913 became the first Alabama native to ever win an Olympic track and field medal with a silver medal in the high jump at the 1936 games in Berlin. He and boyhood friend Jesse Owens competed together at Ohio State. Albritton is a member of the Ohio Sports Hall of Fame and the Ohio State Hall of Fame.
Read full article

Stuart Allen, 64, the 1976 Austin graduate played basketball for the legendary coach Joe Jones. He followed Jones’ career path as a coach and became the Austin head coach in 1998. After moving to Madison County in 2006, his Tigers won the 2007 Class 4A state championship. Allen retired from coaching in 2020 with over 400 victories.
Read full article

William Booth, 77, the Hartselle baseball coach for 34 seasons has led the Tigers to eight state championships and four runner-up finishes. The state’s winningest high school baseball coach has a career record of 1,106-493, which ranks him 10th all-time nationally.  He was inducted into the Alabama High School Sports Hall of Fame in 2018.
Read full article

Mario Morris, 50, was an All-State football player at Decatur 1989. He was a starting linebacker on the University of Alabama's 1992 national championship team. Today, he's at Notre Dame as the Deputy Athletic Director for Business Operations.
Read full article

David Ogle, 68, was a valuable reserve on Decatur’s 1970 state championship team. After graduating in 1971, Ogle played at Athens College. He coached 40 years at Auburn High primarily as an assistant coach. Ogle was the head basketball coach in 1996 when Auburn won 29 games and advanced to the Class 6A Final Four.
Read full article

Greg Stewart, 56, was an All-State defensive lineman at Austin in 1982. In college he played on national championship teams at Troy in 1984 and 1987. Stewart then embarked on a college coaching career that has included stops at Jacksonville State, Delta State, Louisiana, Central Arkansas and South Alabama. He was on the staff at JSU when the Gamecocks won a national championship in 1992.
Read full article

Christy Thomaskutty, 47, gained All-State basketball honors at Brewer from 1990-1992. She played in college at Tulane, where she received several athletic and academic honors. Thomaskutty coached in college before joining ESPN in 2017 as a basketball analyst.
Read full article