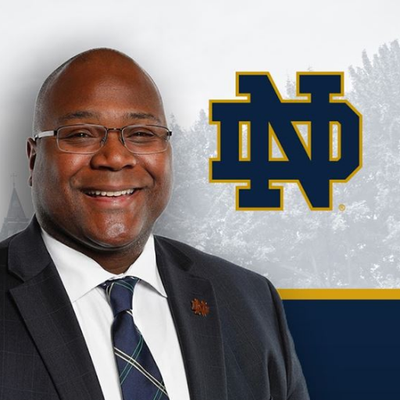 Mario Morris was a first-team All-State linebacker at Decatur in 1989. In 1988 and 1989, the Red Raiders were a combined 17-4 with two region championships. He also played in the 1989 Alabama-Mississippi All-Star Game. Morris then played at the University of Alabama on the Crimson Tide’s undefeated 1992 national championship team. That team won the first ever SEC Championship game over Florida, 28-21, and then stunned No. 1 Miami, 34-13, in the 1993 Sugar Bowl. Morris earned his law degree from Wisconsin and eventually became the Executive Deputy Athletics Director at Notre Dame.

From Decatur To Notre Dame

Mario Morris is a perfect example of how time spent at the Boys & Girls Club can be rewarding.

Morris grew up in Northeast Decatur and had his first experience playing organized football at the neighborhood Boys & Girls Club.

“Oh, those were some of the best times getting to compete against my friends,” Morris said.

Football would become a path to success for Morris, who was an All-State player at Decatur High. He played in college on a national championship team at Alabama and today is playing a part in guiding the future of college football as Executive Deputy Athletics Director at Notre Dame.

“I remember growing up and every day seeing all the trophies my step father Larry Tucker had in our home from his athletic career,” Morris said. “He was a far better athlete than I would ever be and those trophies really inspired me to be successful.”

The Notre Dame Athletic Department website features a staff directory. At the top is Director of Athletics Jack Swarbrick. Four spots down is the name Mario Morris, who has been at Notre Dame since October of 2019.

The listing of Morris’ duties is as extensive as it is impressive. Basically he is responsible for all the department’s core business and revenue generation functions. This is for a department with annual revenue estimated to be in the area of $150 to $200 million.

One of Morris’ attributes is leadership. The work of keeping the revenue streams flowing while also dealing with the changing landscape for collegiate athletes requires strong leadership. Morris is also a leader away from Notre Dame. He was recently named to the board for the Boys & Girls Club of St. Joseph County, Indiana.

“I was in the seventh grade and got to play football at Oak Park Middle School,” Morris said. “Football was supposed to be for just eight and ninth graders, but Coach Daniel Mose would always make a few of the seventh graders come out for football.

As a senior Morris was a first-team All-State selection at linebacker.

“I’ve been fortunate to have coached a lot of guys that had the ‘It’ factor,” Rivers said.

“Mario certainly had it. We knew from the first time we met that he was going to be a great success in whatever he did with his life.”

Morris had college offers from around the SEC and country, but the opportunity to play at Alabama for then head coach Bill Curry was the direction he was following.

Curry was in his third season at Alabama in 1989. The Crimson Tide went 10-2 with a season-ending loss to Auburn and a loss in the Sugar Bowl to Miami. Shortly after the Sugar Bowl, Curry left for Kentucky.

Alabama then hired Gene Stallings to lead the program. One of his first recruiting trips was to Decatur to meet Morris.

“Coach Stallings looked me in the eye and said ‘We’re going to be winners,’” Morris said. “He had me right there when he said those words. That’s all I needed to hear.”

In Stallings first season, Alabama went 7-5 with a loss to Louisville in the Fiesta Bowl. The Crimson Tide went 11-1 in 1991 with a 30-25 win over Colorado in the Blockbuster Bowl to finish No. 5 in the country.

“I played a lot of special teams and was a backup linebacker my first two years,” Morris said. “After that sophomore season I decided I needed to rededicate myself to football.

“I spent a lot of time working out in the weight room every day that summer. In the evening I would be out running. There were a lot of us getting ready for what we thought would be a special season.”

Morris was in the starting lineup for the season opener vs. Vanderbilt that the Crimson Tide won 25-8.

“I thought I played well, but my backup, Michael Rogers intercepted a pass and returned it for a touchdown,” Morris said. “The next week he was the starter and I was the backup for the rest of the season.”

Alabama started the season at No. 9, but as the wins kept coming the Tide started moving closer to the top of the rankings.

The perfect regular season closed with a 17-0 win over Auburn at Birmingham’s Legion Field. That sent Alabama to the first ever SEC championship game the following Saturday at Legion Field against No. 12 Florida.

The game would be decided late when Alabama’s Antonio Langham returned an interception for a touchdown and a 28-21 victory.

That set up No. 2 Alabama vs. No. 1 Miami in the Sugar Bowl. Morris’ role in that game changed the week of Christmas when Rogers was injured in an automobile accident. Morris was now in the starting lineup.

Alabama was ready for Miami and Heisman Trophy winning quarterback Gino Toretta. Alabama defensive coordinator Bill Oliver had devised a special defense for Miami. The goal was to disguise the pass coverage and pass rush in an effort to confuse Toretta.
When Toretta walked up to the line of scrimmage for the first play of the game, he saw 11 Alabama defenders standing at the line.

“I remember the look in his eyes,” Morris said. “He couldn’t believe what he was seeing and didn’t know what to do.”

Alabama won 34-13 for its first national championship after the Bear Bryant era. Torreta threw for 284 yards, but his three interceptions led to three Alabama touchdowns.

One of the biggest plays of the game came in the third quarter when Toretta hooked up with receiver Lamar Thomas for what appeared to be an 88-yard touchdown. Before Thomas could make it to the end zone, Alabama defensive back George Teague caught him from behind, took the ball away and stole any momentum the Hurricanes had gained.

“George was my roommate and he just always had a knack for making big plays,” Morris said. “They don’t come much bigger than that one.”

After another season of football at Alabama with a 9-3-1 record and an Orange Bowl win over North Carolina, Morris elected to pass up his final season of football to concentrate on getting his finance degree and then a law degree. The career path he followed led to Notre Dame.

“It’s really been a good experience here at Notre Dame,” Morris said. “I’ve enjoyed every minute of it.”