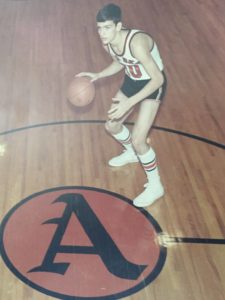 When Charles Lee Martin was a young boy in the 1960s, he and his family moved to a new home on Betty Street.

One of the first things Charles Lee did was build a basketball goal. On the wood frame, he wrote “Tuscaloosa or bust in 69.”

Tuscaloosa was where the high school state tournament was played at the time. Martin’s senior season at nearby Austin High would be in 1969.

On Feb. 22, 1969, Martin’s goal became a reality. Austin beat Cherokee County, 69-59, at what is now Coleman Coliseum to win the Class 3A state championship.

Martin scored 26 points and was named the tournament’s Most Valuable Player. It was Austin’s first ever state championship.

“Winning the state championship is an unbelievable feeling,” Martin said. “There’s nothing quite like it.”

Martin will be inducted into the Morgan County Sports Hall of Fame on May 1.

Austin was a young school in 1969. It opened in 1962 and fielded its first varsity basketball team in the 1965-1966 season. Joe Jones, who had won a state championship at Austinville and later coached at Decatur for five years, started the program at Austin.

“We started playing together as a team in the eighth grade,” said Martin’s teammate Greg Albrooks. “When we were in the ninth grade we won the county championship, the area and I think it was the district. We went as far as we could winning championships.

“I think Coach Jones knew he had something special to work with. We were a good ball team and that’s where it started. It ended that night in Tuscaloosa when we won it all.” 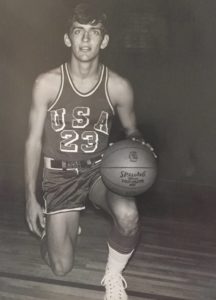 “Joe Jones could show you everything you needed to do to be successful,” Martin said. “Yes, he could be a little loud at times, but I loved playing for him.”

Martin, who started at point guard, said the key to success was team play.

“We played with one heartbeat,” Martin said. “When one of us inhaled, one of us would exhale.”

Linderman describes Martin as the leader of the team.

“We had a lot of good players on that team, but he was the leader,” Linderman said. “He showed us what could be done. As good as he was, when we got to the state tournament he really stepped up his game.”

Martin’s athletic exploits at Austin were not limited to the basketball floor. He was set to be the starting quarterback at Austin as a junior before a pre-season leg injury sidelined him for the season. He skipped football his senior season to get ready for basketball.

Baseball may have been Martin’s most natural sport.  He was a catcher on Austin’s first team. As a junior he played in the Lions Club East-West game at Birmingham’s Rickwood Field. He grabbed the attention of pro scouts when he threw out future star Alabama running back Johnny Musso attempting to steal second base. He followed that with a base hit that sparked his team’s winning rally.

“The Pirates offered me $18,000 to sign the summer after I graduated from Austin,” Martin said. “My parents (Charles Bee and Daphyne Martin) wanted me to go to college. At the time I didn’t think much about it. Sometimes I do wonder what would have happened if I had signed with the Pirates.”

Martin started his college career playing at South Alabama and then later transferred to Athens State.

Basketball was the sport where Martin had to work the hardest to be successful. He would dribble a basketball down Betty Street day and night. The sound of the ball bouncing on the pavement at night was a constant reminder to his neighbors that Martin was working on his game. In the morning he would head to the outside courts at Austin to play against neighborhood players. 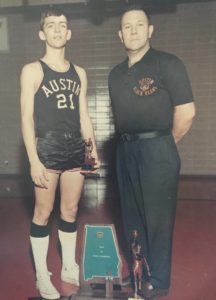 Eventually, Martin took his game to be tested at Carrie Matthews Recreation Center in northwest Decatur.

“It was the best thing I ever did,” Martin said. “I was 16 playing against guys 28 or 30. I would be the only white boy there. To survive there you had to be tough. That’s what made me the basketball player I became.”

An earlier trip to Tuscaloosa also had a big influence on Martin’s game. He saw Alabama play LSU with Pete Maravich.

“That was one of the greatest things to ever happen to me,” Martin said. “I wanted to play like him.”

Maravich is considered one of the great creative offensive talents in basketball history. He is the all-time leading scorer in NCAA Division I history with 3,667 points in three seasons for a 44.2 points per game average. He finished at LSU in 1970 long before the three-point shot entered the college game.

Just like his offensive skills made him unique, Maravich is considered by many to be the greatest ball-handler of all time. Martin wanted to be the next Maravich and copied many of his ball-handling skills.

“Instead of dribbling one basketball down Betty Street, I was dribbling two,” Martin said. “I started dribbling through my legs and throwing the behind-the-back passes.”

Austin went 25-5 in that championship season. The Black Bears won the Morgan County Tournament, the Tennessee Valley Conference Tournament, the Class 3A Area 16 Tournament, a tight region playoff game at Hartselle and then three games at the state tournament by an average winning margin of 13 points.

“I’ve always thought we were meant to win a state championship,” Martin said. “We were a team of destiny.”